As the academic term comes to a close, I have been pondering the fact that nearly all my students, no matter what grade, have recently been working in some kind of collaborative physical theatre form. We teach and use Viewpoints in a lot of our work, even if the students don’t realise it, with Anne Bogart and Tina Landau’s now seminal publication, The Viewpoints Book, being a well thumbed tome on our bookshelves.

In addition, I have spent this week at an International Schools Theatre Association (ISTA) Festival in Taiwan, where the students were exploring the language of theatre. Almost all the work they created communicated through bodies in space and again it struck me that spoken narrative played a secondary role in the stories they were telling.

All this has prompted me to share this video from a TEDGlobal event. In it, choreographer Wayne McGregor demonstrates how he  communicates ideas to an audience, building his work in a seemingly simple way. It revolves around the concept of physical thinking which particularly resonates with me as a theatre maker. Give the video a watch for sure, but don’t miss out on the discussion that follows in the comment section afterwards. Together they make for a great way into thinking about physical representation and storytelling on stage.

I’ve got a great mixed bag of talks to share today from various TED× events around the world and all of them worth a listen when you have a spare ten minutes or so. Most people are familiar with TED talks, but theatre makers are rarely given a platform. However, the independently, locally organised TED× events often have theatre professionals exploring their craft for a wider audience.

The first comes from TED× Stormont, in Northern Ireland where Tom Bowtell, from interactive theatre makers Coney, discusses the powerful potential of offering theatre audiences opportunity to have a say over how the story ends, by inviting them to participate in the creation of the theatrical experience. Entitled Can Theatre Actually Change Anything? it is a super little presentation.

The next two come from TED× events held in Sydney, Australia in 2011 and 2014. In What is theatre capable of? theatre director Simon Stone deconstructs some of the common visual and audio tricks of modern theatre while in Know More About Theatre, You Uncultured Oafs theatre ensemble post attempt to answer, amongst other questions, What is theatre? and What makes good theatre? Very entertaining!

In the next one, The Architecture of Acting, actor Stephen Lang talks to a TED× audience at Swarthmore College, Pennsylvania about how he created his one man play, Beyond Glory.

In The Essence of Acting, actor Mirjana Joković talks beautifully about what lies at the heart of the craft.

I have quite a few others to share, but I am going to finish with a wonderfully insightful talk from theatre director John Wright, one of the co-founders of Trestle. Entitled Rediscovering playfulness in acting and given at TED× Square Mile (London), Wright talks about how we love our (dead) gurus in actor training, the constraints they place upon us and why play should be at the centre of our creative processes.

A week or so ago I shared the video Frantic Assembly Masterclass: Building Blocks for Devising. Today, here is the second one from the company, Learning to Fly, this time led by artistic director Scott Graham. Again, an excellent resource which presents a series of exercises and techniques used to create spectacular lifts.

Incidentally, DV8 Physical Theatre have launched a media portal as part of their online offering.  It includes excerpts of their productions as well as what are called instructional videos about the making and rehearsal of their work. There is a charge (by way of becoming a paying DV8 Member) for viewing the majority of the material, which seems a bit of shame given the generosity of other companies when sharing their working process and methodology. 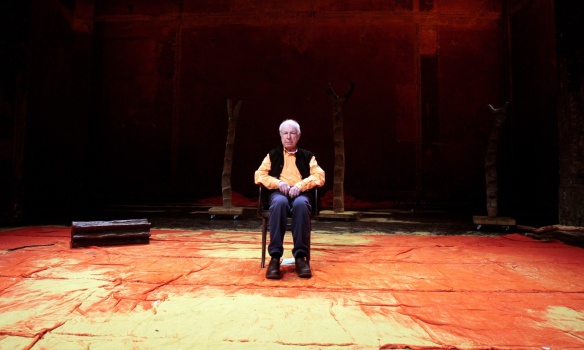 In celebration of his 90th birthday, theatre critic Michael Billington has written Still centre stage at 90: Peter Brook, human earthquake of modern theatre for The Guardian. A super article that looks back at a career that has spanned 70 years, and shows no sign of slowing down.

The record books insist that Peter Brook will be 90 on Saturday. Personally, I find it hard to believe. I last bumped into Brook about 18 months ago at a new play about Kashmir at the Royal Court’s Theatre Upstairs. I casually asked if he was staying in London for long. “Absolutely not,” he said. “I’ve got to be back in Paris to rehearse tomorrow morning.”

There was something in the urgency of his tone that confirmed Brook is a director who lives totally in the present and who regards all theatre as a work-in-progress.

Brook himself hates looking back over his career: not so long ago he told me with horror of a letter he had received from a West End producer asking him to restage his famous white-box 1970 A Midsummer Night’s Dream for a modern audience.

But, even if Brook is immersed in the here-and-now, the rest of us are entitled to put his 70-year-long career in perspective….(continue reading)

Today, I have stumbled across an astonishingly fascinating series of video recordings and I am compelled to share them straight away. They come from Humanitas, a series of Visiting Professorships at the Universities of Oxford and Cambridge which brings together leading practitioners and scholars to explore major themes in the arts, social sciences and humanities. In one of the strands, Drama Studies, the visiting professors so far have been actor Vanessa Redgrave, director Greg Doran, playwright Athol Fugard and will be joined this year by another playwright, David Edgar. All of them are giants in their respective fields. Fugard speaks in three videos; firstly about the defining moments in his life and work, then about staging his plays and finally about his playwrighting process. In his first video Doran gives a practical masterclass looking at what clues Shakespeare puts into the verse for the actor and in the second, another, masterclass, this time on how Shakespeare spins rhetoric for the actor. However, my favorite, are the series given by Redgrave, doyen of the theatre on both sides of the Atlantic as well as prominent social activist. Click on the image below to take you to the first of a series of four lectures and panel discussions, entitled, not surprisingly, Theatre and Politics.

The 2015 series, with David Edgar, promises to be equally interesting and provocative as he explores contemporary playwrighting from a number of perspectives. In an article in The Guardian born out of his appointment as Humanitas Visiting Professor, entitled Is the playwright dead?, he is quoted talking about the anti-writer trend that he considers to be prevalent in current collaborative theatre making. This notion will form the basis for his first lecture and the article itself, my next blog post.