Yesterday morning, at 5.00am, I found myself watching live theatre. It had started at 1.00am and I was just tuning in. It was a live stream of a durational work,  12AM: Awake & Looking Down, by Forced Entertainment. And what a joy it was – my insomniac self isn’t normally this productive. To put it in context,

12am is a physical and visual performance that explores the relation between object and label, image and text…..The piece lasts anywhere between 6 and 11 hours and…..the audience are free to arrive, depart and return at any point.

Although this will be the basis of another post, just for the sake of understanding this one, durational theatre is defined as:

a form through which TIME is manifested in its original (natural) purity and brought to the forefront as pivotal to the experience. The performance is designed so that time, as the primary theme of the piece, physically affects and mentally transforms the performer, the audience, and the space 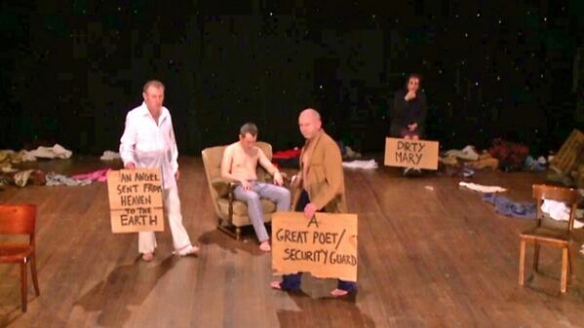 The particular production lasted 6 hours and although I only watched for just over an hour (the stream to Hong Kong was a little too stuttering to sustain more than that) it was an event that I enjoyed being part of. Both Forced Entertainment and Tim Etchells were live tweeting alongside it, as were people around the globe who were watching too, which added to the experience. It felt very ‘live’, but it was the fact that it was a new ‘experience’, a new type of theatre, that I think I enjoyed it more.

These tweets give you a flavour of ‘how’ people were watching and interacting, and they themselves, for me at least, became part of the narrative as it unfolded.

Other people, as the tweet above shows, were clearly having the same experience. But it was the one below that really made me sit up and realise what I was actually witnessing.

I got more excited by the fact that Tim Etchells, artistic director of Forced Entertainment then tweeted the following in conversation with Matt Trueman, a theatre critic:

It is Etchells’ words about context that really struck home. Having written recently, and at length, in my post Something to Stream About about the emergence of live streaming and broadcasting of theatre, this was adding another layer. The day before I had read a piece, Filmed theatre: a new art form in itself?, by Racheal Castell who is Head of Screenings at Digital Theatre.  In it she covers some of the ground I had in my post, but she also observed that

The stage is indeed a precious space, and what happens between actor and audience member therein is both magic and real. But we mustn’t forget that plays are both ephemeral and eternal. A play is written to be performed, but performed again and again on new sets by different actors in reimagined contexts. The tension between the live and the repeated is inherent to most theatre.

Although the point isn’t entirely relevant to this post, the last sentence does connect. However, this second point by Castell is very relevant:

It was more gratifying to witness the responses to our watch-alongs, where people around the globe tune in and press play on a production at the same time and are suddenly able to visit the West End, albeit virtually. It’s as though the breath formed to articulate a Shakespearean monologue, the energy emitted between an ensemble, the tear that falls from a performer’s eye, is the butterfly’s wing and we – with all our technology, our media, our distance, our global experience – are the hurricane.

She is referring to an experience, not unlike watching 12am for me. Digital Theatre’s watch-alongs are dependent on social media, both to generate an audience all watching remotely at the same time as well allowing for a communal commentary along the way. Twitter replaces the real life audience, so rather than turning to your fellow theatre-goer for affirmation of a shared experience, you tweet it instead.

It’s also just struck me – a little off the point – that watching theatre in this way gets rid of the errant rings and glaring screens of mobile devices, hacking coughs, sweet wrappers being opened and latecomers that pervade the ‘live’ experience.

Castell (and many others I have read recently) are struggling to define this new live theatre experience, let alone give it a name. Whatever we eventually end up labelling this vanguard movement, I know I will be in the front row.