I am always fascinated about how we can use technology to create and enhance performance and it is something that is clearly being embraced by theatres, directors and performers around the world. For example, live, streaming performance is starting to become the norm, rather than the exception. The National Theatre, through their NTLive programme, now regularly broadcasts it’s work to cinemas around the world.

However, it’s where technology allows a performance to become something that otherwise wouldn’t be possible is what really excites me. Therefore I was happy to come across this article in Wired by Liz Stinson about a performance called Mr and Mrs Dream. The creators, Le Théâtre du Corps, worked with a software company, Dassault Systèmes, to make something rather special indeed.

A Virtual Stage That Bends Reality and Pushes Theater’s Boundaries

There’s a scene in the contemporary ballet Mr. & Mrs. Dream where the walls of the set appear to burst apart, transporting one of the principal dancers from an apartment living room to a sea of meteorites in outer space. The dancer, Julien Derouault from Paris’ Théâtre du Corps, begins to hop from meteorite to meteorite, and with each step, the space rocks appear to dip from the heft of the human body. Of course, Derouault isn’t actually bouncing on meteorites; in reality, he’s simply leaping on the floor of an almost empty stage. The scene is mesmerizing, and from the vantage point of the audience, it really does look like the dancer is jumping through outer space. But it’s all an illusion, created by an elaborately engineered virtual reality system that could begin to replace traditional sets with projectors, screens and computers.

Though the show was conceived and choreographed by Derouault and his partner Marie-Claude Pietragalla, the brains behind Mr. and Mrs. Dream’s high-tech set is Dassault Systèmes. The French software engineering company typically uses its virtual reality technology to test, model and simulate products for companies like Boeing, so it’s natural to think that this collaboration is a bit of an odd pairing. But, says Mehdi Tayoubi, vice president in charge of experiential strategy at Dassault, interdisciplinary collaboration is becoming more common and more imperative for high-tech companies. 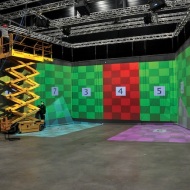 The magic box is made of four screens, six projectors and a main computer that controls it all 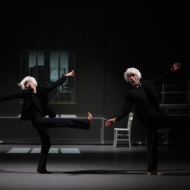 “It’s very important when you claim to be an innovative company, to be able to go outside the laboratory and your comfort zone,” says Tayoubi, who heads up Dassault’s Passion for Innovation program, an initiative whose goal is to apply the company’s industrial research and technology skills to the worlds of culture and education. Since 2005, Dassault has worked with architect Jean-Pierre Houdin to simulate the construction of Cheops pyramid, partnered with director Luc Besson to bring 3-D interactivity to movie theaters, and helped cartoon artists turn their cartoons into virtual reality (and these are just a few of their projects). Mr. and Mrs. Dream is Dassault’s first crack at live dance, and not surprisingly, there were some challenges and miscommunications along the way. “At the beginning it was a little bit difficult,” says Tayoubi. ”But we learned to share the same language.”

One of Dassault’s main challenges was creating a virtual reality system that was technical enough to accomplish the complex visual effects that the dance company envisioned while still being simple to use. “We needed to design a system that we can give to people who are not engineers and they could set up everything in a few hours,” explains Benoît Marini, Dassault’s virtual reality expert. The system also had to be mobile since the company would eventually be touring with it around the world.

Marini’s solution was a mobile “magic box,” which is basically a disassemble-able series of four gray screens and six projectors that would be the canvas for the immersive world of Mr. & Mrs. Dream. The box is similar to the virtual reality rooms traditionally used by industrial companies, only instead of testing emergency scenarios and modeling new airplane features, this box is used to motion-track dancers and project computer-generated images. For scenes like the one mentioned above, Marini positioned three Kinect sensors above the stage to track the dancers’ movements. So when the dancers jump, the meteorites bounce, or when the dancers kick, a flurry of leaves float through the air. Most of the other projected dance numbers were motion-captured in the studio and are played back in sync with the music. The audience doesn’t have to wear 3-D glasses; instead the team uses perception tricks like digitally created trompe l’oeil to convey depth and dimension.

Fittingly, Mr. & Mrs. Dream is based on the work of Eugène Ionesco, the famed playwright whose work was a hallmark of the Theatre of the Absurd. “We always say to our customers like Boeing: ‘There is no limit, dream big, we can do everything,’” says Tayoubi. “So we saw a lot of similarity between Eugène Ionesco and what we are doing everyday.” Tayoubi believes that working on inter-disciplinary projects like this is the key to innovation, citing the magic box as a technology that Dassault will use again at automobile shows to give 3-D representations of new cars. Working with artists forces the scientifically minded to push boundaries and create solutions to problems that they’ve never encountered before. “Artists have a lot of imagination,” says Marini. ”Sometimes they want effects that aren’t possible.” So what happens when the dancers ask for something they can’t create, like holograms that can interact with the audience? “You say, ‘wow,’” Tayoubi laughs, “Then you begin to find a solution.”

You can read a review of the show here.