Today’s post is born out of one those moments of revelation when you think ‘how did I miss that? How can I not have heard of that’.  I am writing about the Bamana giant body puppets of Mali. If you have never heard of this tradition it is well worth looking at, because when I say big, I mean BIG!

I need to point out at this stage that in the Bambara language the same word is used for both ‘mask’ and ‘puppet’, since both serve the same function: to enable mythical and supernatural beings to be brought to life by hidden performers. I got a little confused at first, but I like the idea that there is no distinction between the two .

Below is a brief background, courtesy of Museum of African Art in New York, but first I suggest you watch this.  The narration is in French (Mali was a French colony until 1960) and very accessible even with my poor school-boy ear.

At Arm’s Length: The Art of African Puppetry

The art of Malian puppet theatre, the Sogo bo (the animals come forth), practiced by the Bamana of Mali and originated by the fishing community of Bozo, dates back to pre-colonial Mali. Sogo bo, a performance of puppet and mask dances, tells stories of Malian tradition, imparting valuable lessons in morality while entertaining the audience.

Within the Sogo bo performance animals of the bush are paramount.The Bamana describe themselves as cultivators and hunting people, and it is therefore animals from the bush that predominate. The animal characters represent far more than their counterparts in the bush. They are the symbols, the tangible manifestation of the essential force of the animal. They are the imperial majesty of the buffalo or the conniving duplicity of the hare. The qualities are implied through the costume and the dance of the masker. The buffalo masker regally marches about, and the youthful spark of the hare can be seen in its quick, vigorous movements. The antelope can be seen striding grace-fully, and the baboon jumps about with vigor.

The Sogo bo masquerades are organized by the village youth associations, the kamalen- ton, and the subject matter most commonly dealt with is hunting and heroic behavior. The youth associations, in essence, own the masquerades. They organize the activities of the night, and it is their stories that the masquerades tell. Weeks prior to the fete, the youth organizations meet frequently, planning and choreographing the events of the masquer- ades. The youths of the kamalen-ton choose the cast of characters, the costumes, the stories, and the masks that will be used. They may choose to bring out and refurbish used masks or create new ones. Their mothers, wives, and sisters provide the textiles neces- sary for the costumes. Once the major planning is completed, the youth organizations split into smaller groups and work on the particular renovation or construction projects assigned to them. Throughout this process, the older men act as consultants, offering advice on the construction of the more intricate puppets.

The puppet masks of the Sogo bo are generally worn over the bodies of the performers (usually two men). The performer(s), surrounded by the wooden frame of their puppet masks, are hidden from view by straw and cloth which cover the frame.The head of the puppet is manipulatable , and from within, the performers move the puppet about in dance.

The Sogo bo performance takes place at night, and can carry on well into the early morning hours, consisting of more than twenty sets of dances. Called to the dance by the beat of the drums, the maskers, either individually or in small groups, dance in character. The large and powerful beasts lumber about slowly, majestically (the more powerful ones come out towards the end of the night), while the energy and spark of youth can be seen in the dance of the smaller animals. Each dance set lasts only five to ten minutes, and in between, the women’s chorus provide song (praise songs for the animals). The chorus, however, does not perform during the dance sets, the sets are without voice. It is the masks, the movement of the maskers, and the beat of the drums that tell the story.

Malian puppetry features maaniw, “little people” or puppets in human form. They range in size, from small hand-held rod puppets to almost 6-foot tall figures. Maaniw play an important role in initiation ceremonies and often appear at nighttime on the backs of kalaka (small stages in the form of a body). They often speak of the individual’s place in society and teach morals.

Though there are certain tenets that are retained in the storytelling, it is by no means a static tradition. Puppet plays that were once held only on specified days are now held on weekends, to accommodate the schedule of those who have left the village to make a living in bigger cities. Modern issues are dealt with, and the plays continue to reflect the lives and times of the Bamana.

Then I read about Yaya Coulibaly, 7th generation descendant of Mamari Biton Coulibaly (King of Segou region of Mali) who is the director of the Sogolon Puppet Troupe. After training at the National Institute of Arts in Bamako, Mali,  and l’Institute International de la Marionette in France he mastered the traditional Malian arts of puppetry.  It would seem he doesn’t rest with tradition either. Malian puppet performances are traditionally voiceless, but Yaya has chosen to integrate voice and performance. I realised I had heard of him before and then I remembered he had worked with Handspring Puppet Company, the people who created the horse puppets for War Horse. They collaborated on a piece call Tall Horse which blended two puppetry traditions: the Handspring work which is based in lifelike realism and the stylised, ritual 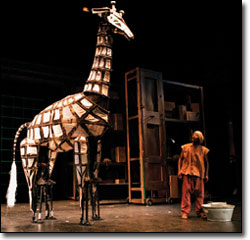 based puppetry of West Africa. The play’s narrative is of  a giraffe and its handler, Atir, sent as a gift from the Egyptian Pasha to the French King Charles X in 1827. Its journey took it via Alexandria and Marseilles, creating a sensation en route. Tall Horse premiered in Cape Town and then went on to tour the world. This blending of styles really appeals to me. I would have loved to have seen the play.

Many of you reading this will know of ISTA – the International Schools Theatre Association and they published a great article a few years ago by Laurie-Carroll Bérubé about her staging of Tall Horse which you can read here, Malian puppetry traditions.

Changing tack slight, as part of my research I came across this fascinating recording of Basil Jones and Adrian Kohler (Handspring’s founders) and others, talking about puppetry as a contemporary medium of communication and influence. Puppets and politics – fantastic! You will need a couple of hours, but it is really, really interesting and worthwhile.

Boliw is the raw spiritual energy/ power contained within performance objects such as masks and puppets. It is believed that women possess boliw – because of their ability to give birth.

Castalet: the large body-puppet, which represents a gentle mythical beast. The body of the animal is a cloth and raffia-covered frame which conceals the puppeteer inside who dances, making the raffia skirt sway.

Sogo Bo: the annual masquerade (the Animals come forth) held in June, just before the rains come to Mali’s Segou region