Roll with me today……there is a bit of a preamble before I get to the heart of my post. One of the many joys of teaching in an international school is that you are not tied to any one national curriculum, which means you can create a programme of study that you know is right for your students. We are currently reviewing the curriculum for our younger students, which is always fun and generates a lot of discussion. We have just decided to include mime 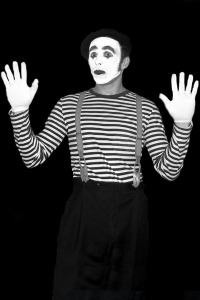 again and it got me thinking about the the form. In the past we used examples from Charlie Chaplin and amongst others, Mr Bean. Thankfully we have moved on from that after we realised the real purpose of teaching mime was to get our students to consider and understand, more generally, the power the actor has to create belief for the audience by simply using their bodies.

What fascinates me is when I first mention mime, students default to this (right) as their understanding!

Now whilst these basic skills are part of mime, they are just that and there is so much more. Yes of course there are a many famous mimes, Marcel Marceau (below) being one of the best known, painted white and doing their thing. But there is so much more to mime and I think this is what should be thinking about as we write our new curriculum.

So I got researching and this is my post today – mime in the 21st Century.

There are mime festivals all over the world, for instance, in South Korea, and Poland. Similarly there are mime companies all of the world, E Movement Theater in Japan and Mime India to name but two. Now the reason I say this because mime is often viewed as a western theatrical tradition, but that couldn’t be further from the truth. Consider Kathakali, Indian epics told with facial expressions, hand signals and body motions, and Noh with its use of mask work and highly physical performance style. In fact the latter was said to have influenced two of the greatest western mime practitioners, Jacques Copeau and Jacques Lecoq. Even Butoh is considered by some to have its place in a (much) wider definition of mime, although I am not convinced myself.

One of the oldest and most famous mime festivals is the London International Mime Festival that began in 1977 and if you take a trawl through their recent programmes you can see that the definition of mime is far wider than we tend to think. Here are a few examples:

and Hiroaki Umeda from Japan with two works, Haptic and Holistic Strata

I’ve had the good fortune to see a couple of peices in the last year or so that I would absolutely consider to be from the genre:

While I was researching this post I came across a couple of quotes from Nobuko and Terry Press that stuck a chord with me:

Mime is largely a misunderstood art form that needs a chance to redeem itself. This can only be accomplished …….by presenting Mime and Mimes that represent the Art of Mime and not the Tricks of Mime.

The first time I saw the “Robot” I was very impressed myself but when there is a Robot on every corner the impact soon wears off.

I couldn’t agree more. Every time I see one of those street mimes, painted silver, I have an urge to run up and punch them!

There is a world of talented performers out there and most of them are not painted white or silver and they are most definitely not making walls!