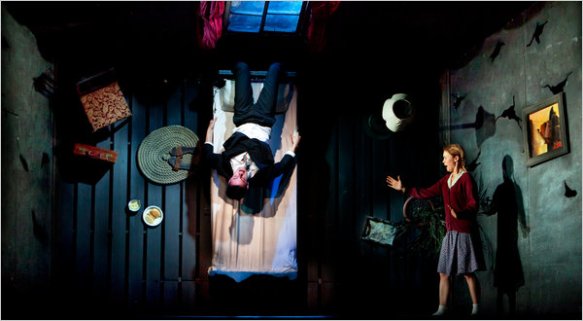 Many writers find their work adapted for the stage, but perhaps one of the most recreated and reimagined is Franz Kafka. Similarly, there are few writers who have had their name turned into an adjective and, with the coining of kafkaesque, he is one of them. Born in the Czech Republic, but writing in german, Kafka is arguably one of the most intriguing and revered writers of the 20th Century.

Kafka on line, a one stop shop for all things Kafka, says the writer

…….is renowned for his visionary and profoundly enigmatic stories that often present a grotesque vision of the world in which individuals burdened with guilt, isolation, and anxiety make a futile search for personal salvation.

I think it is these universal themes that draw theatre makers and audiences alike. Metamorphosis, especially, has been adapted for the stage many times, perhaps most famously by Steven Berkoff, who also staged The Trial  and his lesser known work, The Penal Colony.

Currently there is a series of programmes on BBC radio, In the Shadow of Kafka, which explore his life, works and on-going influence. Amongst these is an adaptation of The Trial, by playwright Mark Ravenhill, called The Process (also embedded below) and well worth a listen.

Along with Gregor Samsa from The Metamorphosis, Josef K from The Trial is probably one of the most famous literary (and theatrical) characters of the last century, and both warrant their own programmes as part of the BBC series. The former is also being read by none other than Benedict Cumberbatch over 4 episodes.

The most stunning adaptation of Metamorphosis I have had the pleasure of seeing is by VesturPort Theatre Company from Iceland, performed here in Hong Kong a couple of years ago and which has toured world-wide to critical acclaim. A fabulous piece of physical theatre and stunningly designed.

For me as a theatre maker, Kafka require risks to be taken both in staging and in interpretation and VesturPort do just this.

Finally, I should say that the title of this post is a quote from the man himself rather than a Sunday afternoon existential reflection of my own.