Now then, Gaming. Never something I’ve managed to get into, which is probably a good thing for me – Angry Birds is about my limit and even that frustrates the hell out of me. However, I do know that many of my friends are into gaming, online or off and that certainly many, many of my students are and this is where the research trail for this post began.  I have a student, Arisa, who is looking to explore the link between performance and gaming as a focus for her extended project.  Not wishing to sound like a complete idiot when advising her I decided I should do some research of my own and I was astounded at what I came across.

So I’ll start here with a review for The Crash of the Elysium (above) which is a new piece of children’s theatre, set in a multi-story car-park, by the internationally renowned Punchdrunk which is described as much of a game or adventure as it a performance. One critic commented

You certainly have to be on your toes, and…….is a one-off experience that children are likely to talk about for years. It’s also a reminder of what theatre can learn from other forms, particularly gaming. The excitement of the young audience comes…….from an active engagement in the unfolding scenario. Take nothing with you except a sense of adventure, wear flat shoes, be prepared to run…….

So this led me to Punchdrunk’s collaboration with PlayStation for the release of Resistance 3, Sony’s flagship sci-fi horror series. The company created a terrifying world beneath the railway arches at Waterloo station in London. The audience take the role of one of the few remaining survivors of an apocalyptic event and as one commentator noted:

From the moment the door closes behind you and you start to navigate the first dank corridor, torch in hand, you are as much part of the experience as witnessing it 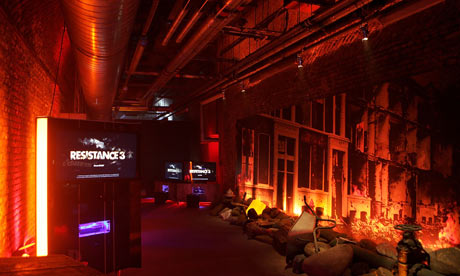 And Darkness Descended as the piece is called was reviewed widely – both as a piece of performance and by technology writers and bloggers and the reaction from the two very different groups is fascinating. One blogger, Kevin Holmes who writes for a collective called The Creators Project (which is a global network dedicated to the celebration of creativity, culture and technology) entitled his piece Gaming And Theater Merge To Scare The Crap Out Of People – which I just love as a description.

Then I found this article The Seed: where theatre, gaming and botany collide on a gaming  blog. The Seed is by the company called Goat and Monkey and is described as part immersive theatre and part on-line mystery.  This led me to another game blogger, Fin Kennedy, who asked the question Can video games help theatre reach the next level?

Another writer, Matt Trueman, asked the question The form is growing up. So what do we want from our games as theatre? Is it enough just to play or must we demand that games demand more?

I then came across another Punchdrunk production Sleep No More which is based vaguely around Macbeth, and was described by Salon website as

.Click the image above for the New York Times review, or here for the Salon article.

This is a relatively new developing area of theatre. There is clearly much emerging all the time. There are even doctoral thesis’ being written on the subject. There is one here, by Katherine Whitlock, entitled THEATRE AND THE VIDEO GAME: BEAUTY AND THE BEAST.