As a drama and theatre teacher, you are always proud of what you ex-students go on to achieve, be it a doctor, a lawyer, working in PR or in business…..the list is long and gratifying. However, you always have a soft spot for those that have the will, determination and talent to keep going and make it in the cut-throat world of professional theatre. Yesterday, on Facebook, there was a post on my timeline from my old student and friend Shannon Murphy. It was an interview with her in TimeOut Sydney. So with great pride and a wry smile on my face it is my post for today.

Meet a Sydney director with an unquenchable artistic appetite. Darryn King tucks in with a true theatrical omnivore

Shannon Murphy arrives at the Time Out photo shoot with her entourage in tow: a couple of tittering blonde starlets, a man in a coat and tails and top hat, a grinning performance artist duo…

Murphy is used to keeping diverse and colourful company. For Sydney stages in 2011 she directed the warm-hearted romantic comedy This Year’s Ashes right after directing Trapture, a psycho-surgical freak-out of a show that featured live urination and a pig’s heart barbecue. Before that she directed two young teens and a seven-year-old (in Tusk Tusk) and before that she directed three women in a trio of grisly poem-monologues (Crestfall).

Even in primary school Murphy was a theatre-maker of bold vision. “I wanted to direct the nativity play but was told my ideas were too radical,” she says. “All I wanted was the angel Gabriel on roller blades.” 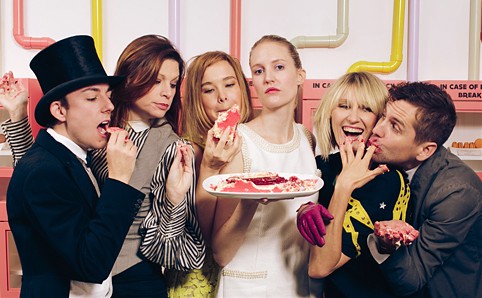 It’s possibly her international upbringing – Murphy was born in Africa, raised in Hong Kong, primary schooled in Melbourne, college educated in America – that makes her so comfortable navigating disparate theatrical worlds. “Sometimes people find it tricky when they can’t define an artist,” she says. “But I just love continuously expanding. I always try to find something new every time that keeps stimulating me – in the form or the style of the work or the writing of the work or whatever it is. It’s got to be really different from anything I’ve done before because otherwise I get bored.”

Given that, it’s not surprising that Murphy is now considering joining her partner, actor Dan Wyllie, in pursuing a career off-stage. “I would really like to look at film and TV, a completely different form,” she says.

In the meantime, though, Murphy is working on two back-to-back theatre productions. She’s currently in rehearsals for the angsty sex comedy Porn.Cake for Griffin. “It’s about this idea of Saturn’s return, reaching 40, seeing things anew – and wondering whether you will ever find the pure and simple happiness you felt pashing someone for the first time or finding a click beetle in your party bag…”

And, after Porn.Cake, Murphy bounds straight into rehearsals at the Ensemble Theatre for Circle Mirror Transformation: a play set in a community centre drama class. It’s a glimpse, Murphy says, of what it feels like in every rehearsal room. “What starts off with drama games ends in people’s lives being changed, in a way.”

When our photo shoot gets underway, we get a glimpse of what it must feel like in Murphy’s rehearsal room in particular: Murphy’s actor buddies bunch up close for the camera, laugh, clown and take turns pawing at her face.

Our photographer asks one of them, “Can I get you to lick her face again?”

She obliges. Murphy doesn’t even blink.