As those of you who read Theatre Room regularly will know that I’m no great fan of musical theatre.  There are however some exceptions, one being The Lion Kong. I first saw it in Los Angeles many years ago, and have been urging people to go and see it ever since. It first opened in Minneapolis in 1997, quickly transferring to Broadway. in 1999 it opened in London at the Lyceum Theatre, where it is till running 15 years later. In fact, it is currently playing in 10 cities world-wide. In its 17 years it has been seen by an estimated 75 million people and taken $6.2 billion, making it the highest grossing musical ever. Impressive figures indeed.

In a great article by David Gritten in The Telegraph, How The Lion King became the most successful stage show of all time he quite rightly points to the original director, Julie Taymor, as the creative genius behind the show.

It’s easy to overlook, what with all the trumpeting of huge grosses and audience figures, what a radical piece of theatre The Lion King is, and always was.

Credit for this goes to the prime mover of this stage version, director Julie Taymor, who came from avant-garde, ritual and experimental theatre, and had already used masks and puppetry in other productions. Taymor also helped design the costumes for the Lion King, and even wrote the lyrics for one of its songs, Endless Night. 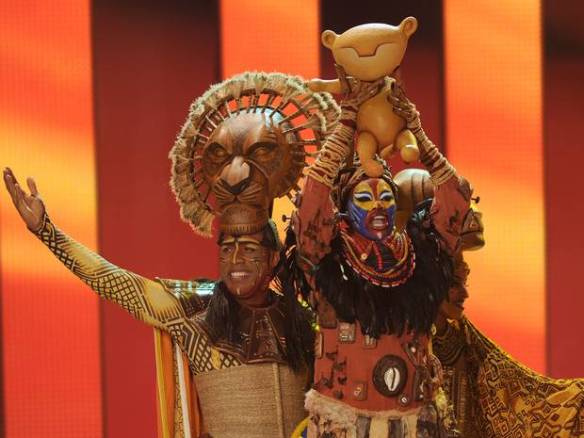 She has created a world that is fiercely non-literal, often to moving and wondrous effect. She makes no attempt to disguise the fact that these animals are moved and performed by humans. A drought on the African plain is conveyed by a circle of blue silk gradually vanishing by being pulled through a hole in the stage. When a lioness weeps, she pulls lengths of white ribbon from her eyes. Taymor evokes a waterfall using a huge sheet of billowing silk. A score of actors stride on stage, boxes on their head with long grass sprouting from them; this is Taymor’s way of representing the African savannah.

All of which seems a long way from the animated film and video of The Lion King, which proved immensely successful for Disney in the 1990s. They’re agreeable entertainments, based on a hero-myth story redolent of Hamlet. As a young lion cub, Simba is hoodwinked by his malevolent uncle Scar into believing he was responsible for his father the king Mufasa’s death. Simba flees before returning as an adult to reclaim his birthright from Scar, who has installed himself as king. 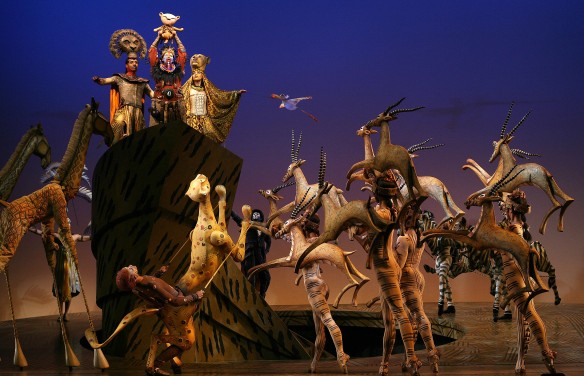 This is all fine as far as it goes, yet there’s a cosiness and reassurance about the film that Taymor withholds; in the stage version there is simply more at stake, along with a recognition that life is fragile. She also gave far greater emphasis to the film’s female characters. There’s a tough-mindedness about her method of story-telling; it’s surprising that Disney, to its great credit, approved such a radical reboot of the film.

Gritten’s article is well worth a read in its entirety here.  Another one, this time by Adam Sherwin here in The Independent explores the money-making side of the The Lion King. Apparently Sirs Tim Rice and Elton John, the composers and librettists of the musical, have made a whopping US$120 million apiece from the show!

To finish with,  it was recently announced that Disney have adapted the musical for schools which will be licensed for performance from January 2015. Disney, Rice and John will no doubt need to get deeper pockets.

By way of a post script, I should say that the show’s appeal for me is the ingenious way in which the animal characters have been brought to life with puppetry.  The man behind most of the puppets is Michael Curry, and there are a couple of interesting interviews with him here and here about his work on the show .