This week I have watched 9 new pieces of theatre, as part of the exam season in my school. It never ceases to amaze me how powerful and prescient young peoples’ theatre can be and this week was no exception. A friend of mine (and ex student who did the same examination almost 20 years ago) commented that the real strength of a devised performance exam is that it

isn’t a recollection of prescribed ideas but in many ways a reflection of a group of young people’s interpretations of their surroundings expressed through [drama] techniques, skills and knowledge…

This is so true and why a drama education has so much value beyond the performance skills taught. My Grade 11 students tackled a range of issues from the Palestine/Israeli conflict to autism and it is the latter that led me to the focus of my post today.

The piece was inspired initially by this interview with Robin Blamires on the BBC World Service Outlook strand:

and the podcast, Inside The Mind Of A Hypomanic created by him.

Blamires is autistic and has suffered with hypomania and bi-polar disorder. His podcast explores what it feels like to go through a manic episode.

The piece my students created was called A Quiet Mind and drew on verbatim interviews with those on the autistic spectrum, poetry, soundscape, physical theatre and Butoh.  It simply created the world of someone with Aspergers and allowed the audience to experience that viscerally.  It moved many to tears. It is now being re-staged next week as part of an awareness campaign for World Autism Awareness Day. It was an amazing piece of theatre and really got me thinking about how in theatre we represent mental illnesses and disorders. In some societies, mental illness remains an unspoken subject, almost taboo. Representing what such illnesses are really like for the sufferer is difficult and we often end up with stereotypes or simply exploring the worlds of the people around the person, not the person them self.

There are a good many plays that have characters who are clearly suffering a mental illness, amongst the best are Find Me, by Olwen Wymark and 4:48 Psychosis by Sarah Kane. But even in the former the narrative tends to be led and experienced by those around Verity, the central character, rather than by her own direct experience.

In a fascinating article for Everything Theatre, Dr Rachel Proctor argues that:

theatre has an opportunity and a responsibility to educate us about the realities of mental illness, not simply increase our misunderstanding and paranoia.

Proctor’s stance is clear – the portrayal of mental illness on stage is not done well, often touching on stereotypes and lacking true insight. She concludes, asking:

Am I criticising the portrayals? How can I – writers, directors and actors have a right to put on stage anything they want……. but what I would argue is that there is a responsibility for some accuracy in a topic so grossly misunderstood. Mental illness scares us – whether through lack of understanding or fear of it in ourselves. Theatre is a powerful educative tool, and I believe it has a place – and indeed a responsibility – to educate us on this topic.

A recent very successful adaptation and staging of Mark Haddon’s The Curious Incident Of The Dog In The Night Time could be viewed as pushing mental disorder in to the theatre mainstream. In this case the narrative is driven from the perspective of the lead character, school boy Christopher. You are led to assume that he is autistic, although this is never stated in either the novel or its adaptation.

The Curious Incident of the Dog in the Night-Time

Yet the reality is, and back to Dr Proctor’s point here, there are precious few examples of plays that deal with mental illness honestly, realistically and allow the audience to truly understand what it means to be a sufferer. However, and is often the case when I decide to write something specific for Theatre Room, two examples of what I was really looking for popped up in my Twitter feed.

Firstly, a play called The Eradication of Schizophrenia in Western Lapland by London-based company Ridiculusmus. The play is inspired by a treatment method for psychosis that has virtually led to, as the title suggests, the eradication of schizophrenia in Western Lapland. It is described here as a startling piece of work by Maddy Costa for The Guardian and here as dense and audacious by Stewart Pringle for Exeuent. Not unlike my students’ work, it immerses that the audience in the world of the suffer. Interestingly, the play was commissioned for the SICK! Festival in the UK, which is a new festival exploring the medical, mental and social challenges of life and death and how we survive them (or don’t). 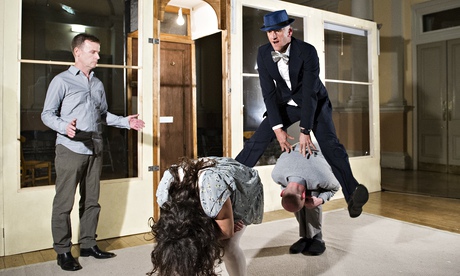 The Eradication of Schizophrenia in Western Lapland by Ridiculusmus. Photograph: Tristram Kenton for the Guardian

The second play, Head Hand Head by Laura Jane Dean is a solo show written and performed by her, drawing on her experiences of living with Obsessive Compulsive Disorder. In her review for Exeuent here, Alice Savill says that being trapped in Laura’s perspective feels almost dangerous; her explanations of her fears seems so rational, their results so irrational. Whilst in A Younger Theatre here, Devawn Wilkinson says that it is quietly devastating and that it blazes with honesty.

Interestingly, and by way of wrapping up, as I was doing the research for this post, I was reminded of a theatre company, Stepping Out,  who have been creating theatre about mental health issues for almost 20 years. Their work is multifaceted. Not only do they make theatre about metal health issues, they also use it as therapy for sufferers. I also came across an organisation in Australia called Mindframe Stage & Screen whose purpose, amongst other things, is to provide research and sources to writers dealing in such illnesses as well as ensuring that

Depictions of mental illness are based on accurate information, challenge stereotypes and myths about mental illness and encourage people with mental health problems to seek help.

I should say I have made a purposeful point of not mentioning plays where it could be  assumed that a character is suffering from a mental illness of one kind or another – think Hamlet, Lear, Medea, Blanch DuBois and so on – as they are merely projections by a director or actor in search of meaning and truth that probably never existed in the playwrights mind to begin with. Also, there are terrific works like Blue Orange by Joe Penhall which treat mental illness sensitively and in context, but use them really as a way to drive a broader narrative. 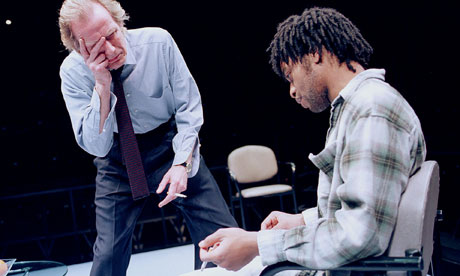