There a few things I have always had to begrudgingly admit that cinema does better than theatre, and one of them is death. A death – be it by murder, accident or natural causes – on stage is alway difficult. We suspend our disbelief, but when I see someone chopped down in the prime of life in front of me – I’m thinking Hamlet, Romeo and Juliet – it always leaves me (rather than the supposed corpse) a little cold.

So it was with some interest that I read Jane Howard’s article in The Guardian that mused on this most difficult of theatrical acts:

Can theatre ever pull off a convincing stage death?

If you’ve been to the theatre even a handful of times, it’s likely you’ve seen a stage death. Our fascination with death seems endless, and proves fruitful picking for playwrights. For the writer, there’s power in making an audience empathise with a character and then ripping that character away, and there’s also power in the vindictive killing of the disliked.

Post’s Mish Grigor describes the work as exploring the “tension between the fact that death is an actual universal, and the western theatrical canon is often spoken about as having universal themes or, these plays speak to all of us. We’re interpreting an actual universal through something that we don’t think is really universal, but pretends to be.”

Is death, then, perhaps an easy way of trying to create a connection with the audience? It is something that everyone watching will have a relationship with, even when other themes a play explores may be foreign? 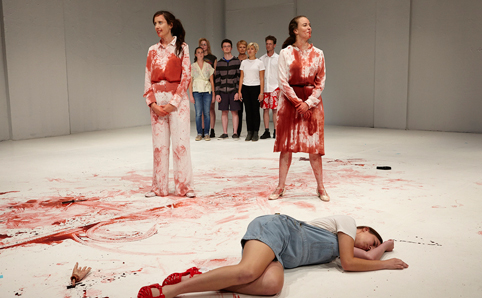 And yet, we are readily judgemental of watching someone pretend to die. When we’re watching theatre we suspend disbelief in so many ways, buying into the construct of the world and using our imagination to fill in the gaps. But there is something about death that is particularly sticking when it comes to witnessing it on stage.

“I find it quite absurd when an actor dies on stage,” says Grigor, “because we know that it’s a game of pretend: they’re still breathing. You can still see them breathing a lot of the time, and the stage trickery that is employed is usually not that good.”

When you start talking about the practice of death and dying on stage, the same concerns repeatedly come up. Tim Roseman, artistic director of Playwriting Australia, says: “The trouble is, it’s an inherently over-the-top theatrical thing that theatre does, because at the very least you’re left with: what do you do with the body? And so the artifice is always problematic.

“Because I know you’ve got to do it 34 more times before you finish the season and, literally, do you just get up and walk off? Do we get someone in black to come and steal the body in the end? It’s a really problematic thing. And, you know, fake blood. So I think it’s the thing we buy the least.”

It seems that while we’re prepared to ignore the wires helping someone fly, there is something about death that makes us watch for the rise and fall of an actor’s chest or shadowed movements in the blackout.

Maybe that’s why, when I look back at the deaths on stage that have truly impacted and stayed with me, I keep returning to puppetry. The death of the title character of the Adventures of Alvin Sputnik: Deep Sea Explorer, a puppet made from little more than a white-gloved hand and a foam ball, left me holding my breath to not audibly sob. The deaths of hundreds of silent puppets at the hands of Nazi soldiers in Hotel Modern’s Kamp left my heart in my throat and my brain overwhelmed.

I mentioned these deaths to Nescha Jelk, artistic associate at the State Theatre Company of South Australia. “It’s because the puppeteer animates it, gives it that life and gives it that real presence,” she says. “We really invest [emotionally] with the puppets, but it’s so easy to de-animate them and to take that away.”

Grigor agrees: “There’s always life in the person, isn’t there? You always know. For me, I find it very hard to escape that knowledge: that a person is just a person.” 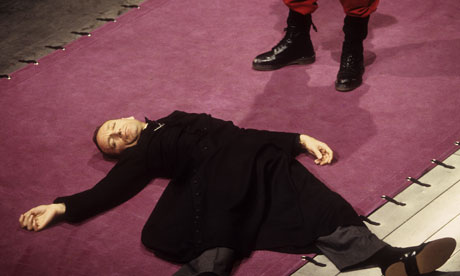 Not surprisingly this led me to see what other people had to say on the topic. A blog post Alexis Soloski, also in The Guardian, from a year or so ago – What makes a good stage death? Forget all that tediously realistic convulsing and juddering – a really convincing theatrical death is better left unseen – is great and her list at the end, about what should be remembered when ‘acting’ death, just made me smile:

2. Perform the death on stage but avoid showing it directly, as in the famed stoning scene in Edward Bond’s Saved.

3. Keep convulsions to a minimum.

5. Try to die on your stomach or with your back to the audience so they don’t see you continuing to breathe.

6. Actually die. There are – a very small number of – actors who have perished while treading the boards. (This method is not recommended. Not only is it tremendously sad and frightening, but it’s terribly inconvenient for the next day’s matinee.)

There is also a great article from TimeOut Sydney, Death Scenes,  which talks to six performers about how they ‘do’ death on stage. One of the actors interviewed, when asked if their mind wonders once they have been killed, said:

A rather more serious article from theatrebayarea.org, I’m dying out here has in interview with actor James Carpenter who has ‘died’ many, many times on stage and is an interesting read on the subject.

I’ll finish with an extract from a post by Alfred Hickiling, Death by overacting, The Greeks did it tactfully, Bottom did it endlessly

There is a lot of death in the theatre: sometimes good, but frequently so bad as to make you wonder why anyone ever decided to mess with the formula established by the Greeks. You can’t help but feel that the fathers of western drama had it right when they opted to keep all the gory business off stage – why spoil the performance with a series of unnecessary convulsions when you can send a messenger to report that you expired heroically, with all your tragic dignity intact? Ibsen, Chekhov and Miller got the message: a solemn exit followed by a solitary gunshot, a profound silence and no mess.

It is the Jacobeans we have to thank for plays that conclude knee-deep in guts, thanks to their macabre fascination for golden daggers, poisoned Bibles, severed limbs and so forth – which all the followers of Sarah Kane and the Blasted school have enthusiastically revived today. But if one were to identify the absolute nadir of unconvincing expirations, it is as well to start at the Bottom:

I have seen actors spin Bottom’s soliloquy out for several minutes, at which point the joke no longer seems to be on Shakespeare’s weaver, so much as on themselves. But if the death of Pyramus is daft, Shakespeare also crafted some of the most exquisitely moving death scenes of all time, such as Cleopatra with the asp (“Dost thou not see the baby at my breast that sucks the nurse asleep?”), as well as one of the most defiantly underplayed (Mercutio’s “’tis but a scratch”).