My second post today is an article from The Guardian written by Haleh Anvari. It is about a rather special piece of immersive theatre that takes place in the back of a taxi, in the Iranian capital Tehran. Just fantastic!

Iranian cabs afford passengers a degree of anonymity, paving the way for uninhibited conversations and a new play

That Tehran is beleaguered by appalling traffic and toxic air is no secret. The use of that traffic as backdrop to a play in a moving taxi, especially during some of the most polluted weeks of the year, is testament to the resilient creativity of the city’s young artistic community and their readiness to push boundaries not just in terms of art but physical wellbeing. 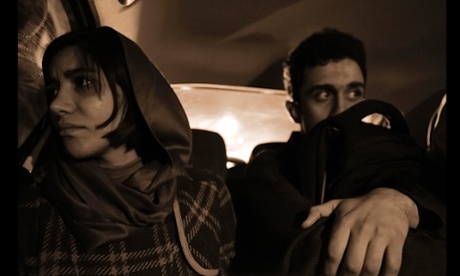 Unpermitted Whispers is a 35-minute play that takes place in one of Tehran’s “Rahi” taxis, which traverse the city along fixed, often straight-line, routes. Rahis pick up passengers at major intersections and drop them off anywhere along their set route, making for a convenient method of getting around town and one cheaper than the minicabs available in every neighbourhood of the capital.

In contrast to the minicabs, which provide door-to-door service, the Rahi system affords passengers much more anonymity, allowing for candid and uninhibited conversation. Tehranis frequently share stories that they have overheard in these communal cabs; for many, they serve as an extension of the private sphere in which Iranians feel safe to talk about issues of the day. Unpermitted Whispers takes advantage of this unlikely superimposition of public and private to tell the story of three passengers, all women, who are picked up by a male driver at different points along his route.

To see the play, we were instructed to assemble at a busy downtown coffee shop around the corner from the University of Tehran. The modern café, run by a troop of young, funky Tehranis, is an essential part of the production. It acts as the foyer to the moving theatre.

A short wait and a couple of lattes later, we were asked by a young woman to follow her outside to the nearest intersection. We waited on the street corner just as we normally would to catch a Rahi. A nondescript older model grey Peugot stopped at our feet and the usher beckoned us to get in. Before the taxi pulled away a young woman threw herself in beside us, and the play began.

There are four shows nightly, necessitating arduous organizational exertions. For one thing, the sessions can hardly be expected to start exactly on time, since the stage is at the mercy of Tehran’s nightmarish traffic. The taxi’s dramatic maneuvers are an additional cause for concern. Twice during the performance we attended, the driver swerved violently to the side of busy Taleghani Street to facilitate the unfolding drama.

As Tehranis we are very familiar with the communal cab, both its discomforts and its possibilities: the forced intimacy that results from sitting beside total strangers, the unwanted physical contact, the vexingly loud conversations on mobiles, as well as the impromptu debates and spontaneous venting about contentious social and political topics.

The play’s first scene was performed entirely on the telephone, as we eavesdropped on a conversation of a kind with which many Iranian women are familiar: a young bride wants to go to the theatre with her university friends but needs an alibi as her traditional family and jealous husband will not approve.

The second scene involved another young woman, who had lost her brother and fiancé after they were called up for national service. It was confusing and a tad overdramatic – especially when she leapt out of the car while it was still in motion.

The third featured a chador-clad woman from the shore of the Caspian Sea – her perfect Gilan dialect would have benefitted from subtitling – in search of her abusive husband, hospitalized somewhere in the city. We were taken to three hospitals and watched as she disappeared into each to “make enquiries.”

By this point, we had willingly suspended our disbelief and were interacting naturally with her plight, more like actual Rahi passengers than spectators. I and the other woman in our little group told her she should not endure being beaten, while the male passenger resorted to an Iranian adage:“You enter your husband’s household in a white dress and you leave only in another white garment – a shroud.” This provoked a heated conversation which was missed by the actress, then evidently hanging around the A&E room of the last hospital for the sake of verisimilitude.

The play was produced by Urban Arts House, an innovative new collective of young professional artists from different disciplines who are devoted to the urban culture of Tehran. They produce and encourage the making of experimental art in and about the capital, aiming to engage the public with the arts amid the city’s everyday spaces.

The show’s creator, Azadeh Ganjeh, is a scholar of Shakespeare who specializes in environmental art. Her three female characters were ostensibly inspired by major Shakespearean figures: Othello’s Desdemona, Hamlet’s Ophelia and The Taming of the Shrew’s Katharina. I felt that the play would have made better use of its setting had she introduced some male characters from Tehran’s own bustling streets and rounded out the stories with some of the more comical moments we encounter daily negotiating life in the city.

The Rahi drivers are as vociferous as the cabbies in any metropolis and often hold court, directing the conversations within their vehicles. In Unpermitted Whispers the only male character, the driver, was no more than that, a sidekick to the drama of the three women, each trying to overcome her difficult circumstances. At best he served as a symbol for the modern Iranian man, willing to help but unable to effect any real change.

It was a little disappointing, thus, to find that the stories addressed the strains and challenges of just one half of the population. The innovative use of the urban environment, on the other hand, was effective. Our voluntary participation in the drama within this one Rahi amplified the sense of Tehran as a living stage with ongoing dramas in every unseen corner.

We were dropped off some blocks away from the coffee shop where we had started our journey by the apologetic driver, who declared that he would continue to help the lady from out of town find her husband.

Trying to find the way back to our car, we asked directions from a young couple strolling down a quiet tree-lined street. As the man stopped to assist, his female companion ignored us and continued to walk on. There were tears quietly running down her face. Was this a real lover’s tiff or were they both part of the play? For a moment, it wasn’t easy to be sure.