When I started Reading Room it was based solely here, on WordPress. Slowly it spread to have a presence on Facebook and Twitter, which became a source of material. Recently I added Tumblr in an attempt to reach my students in another way, but unwittingly I tapped into another fascinating source.  There are some great Tumblrs that curate theatre designs by the hundreds and I’m going to share a few today – for inspiration more than anything else.

One Tumblr I follow is yeahtheatresetsandprops who posts regularly and has a great and varied selection of set designs from Europe and the US. The above design is by Troy Hourie for The Classical Theatre of Harlem’s production of Peter Weiss’ play, Marat/Sade. The one below is from the brand new American Psycho, The Musical which has just opened at The Donmar in London, starring Matt Smith – he of Dr Who fame (with rave reviews, I should add). The design is by Es Devlin and has garnered equally great plaudits as Smith has for his performance in the show.

Another I follow is Everything Scenic who posts some lovely designs and videos too. One beautiful design that struck me is this one, for Sunday in the Park with George, by David Farley.

Another is for a rather wet version of Metamorphosis (Ovid, rather than Kafka), designed by Daniel Ostling at the Arena Stage in Washington DC.

Everything Scenic also posts some unedited video, straight from the stage manager, like this one that shows the stage machinery used in Billy Elliot, the musical.

Another Tumblr I follow is the bizarrely named Glut and Decadence, who also posts some great photo sets of scenic design. These are for a production of  A Midsummer Night’s Dream, for Theatre For A New Audience (New York) directed by Julie Taymor (of Lion King fame) and designed by Es Devlin: 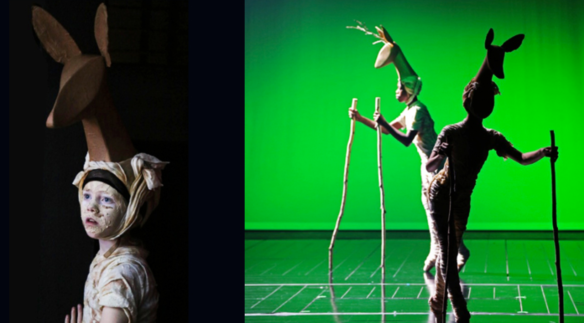