I realised this week that I sometimes miss the blatantly obvious when I am writing this blog. Once a week I set aside time to explore the things from Twitter that I have mined during the previous 7 days as well as trawl through the tried and trusted sites, blogs and people who feed Theatre Room. Also, I am often prompted by questions from my students and debates and discussions that happen in the classroom and studio as well as discussions with theatre teaching colleagues.

At the moment, all of my senior students are involved with research projects of one kind or another and I have quietly being doing some background research of my own to support them. And so it was that I came to the realisation above. One of my students, Grace, is exploring Commedia dell’Arte for her Independent  Project and although I know have referred in passing to the tradition, I don’t think I have devoted a post to it. So here it is. 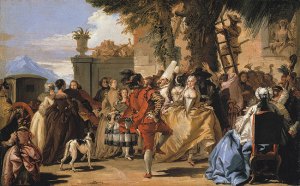 There are lots of bits and bobs on the internet about Commedia, some more useful than others, but a general Google search will throw all these up. One of the best on-line histories comes from theatredatabase.com and can be found here. However, the best sources of information still remain (much to my surprise and occasionally to my students’ chagrin) printed texts. The best list of these can be found here, complied by Jonathon Becker on his website theatre-masks.com. Of all of these, there are two that stand out.

Firstly there is Commedia Dell’Arte: An Actor’s Handbook by John Rudlin which is a bit of a bible, in my opinion. One review on Amazon says It is not an esoteric bible of secret facts which will allow anyone to become a commedia performer.It is an actor’s manual and, if you cannot find adequate live teaching of the form, it is one of the best books you can find to start with. I couldn’t agree more!  The other one I always recommend to students is Playing Commedia by Barry Grantham. It has a section on different types of warm-ups and games specific to

skills and/or characters and there is another section with a history of each character which is invaluable. There are lots others available, some more practical, some more academic, but these two are my favourites. In fact the number of books still in print says much about the tradition itself – it is alive and flourishing. One company that specialises is Faction of Fools, based at Gallaudet University in Washington DC.

Commedia is classed by UNESCO as a piece of Intangible World Cultural Heritage and as such there is even a World Commedia dell’Arte Day, 25th February every year. A look at the report produced for the 2013 day shows just how wide-spread (5 continents) Commedia practitioners are.

I want to share a series of videos produced by the National Theatre in the UK, which are a great little resource.

The workshops in the video are led by Didi Hopkins from Commediaworks, a UK based organisation that aims to keep the [Commedia] flame alive and burning bright. To this extent, they worked with Richard Bean, the writer of the internationally successful modern reworking of Carlo Goldoni’s classic The Servant of Two Masters, in the form of One Man, Two Governors.  You can read Goldoni’s original text here, courtesy of Project Gutenberg. Goldoni is often accused of ‘killing’ Commedia, by writing it down – committing an oral, improvised art, to the page. Hopkins and her partner in Commediaworks, Ninian Kinnier-Wilson, wrote the programme/play bill notes for One Man, Two Governors where they challenged the notion of Goldoni as ‘murderer’.

When Goldoni wrote The Servant of Two Masters, some say he killed Commedia dell’Arte. Was it alive? What was it? And why was a playwright accused of its murder?

Commedia dell’Arte, or  Comedy of the Guild, was the first professional theatre in Europe, appearing in the 1550s in Northern Europe. Actors were paid a fair wage. A round of applause on your exit line meant you often got extra money… and on stage, for the first time, there were women. Before Commedia, Literary Societies, populated with academics, often performed amateur theatre, and there were professional entertainers – jongleurs – but there was no professional theatre. Commedia dell’Arte seems to have been a marriage between the academics and the jongleurs, between ideas and skills, between mind and body, and between high and low class. It was originally known as ‘Commedia all’Improviso’, the players taking the roles of different types found in society, from lowly servants to middle class professionals and lofty aristocrats. These types were clearly defined and contrasted to help the actors with their improvisation: high masters with low servants, lost lovers with knowing maids, cunning servants with stupid masters. As there was no written play, the actors worked from a scenario or running-order pinned up behind the stage, detailing entrances and exits of the players and the main points to be conveyed in the scene.

Traditional themes involved riches and poverty, power and servitude, barrenness and fertility, wisdom and folly, and, of course, life and death – powerful reasons to drive characters through their stories.
There was no central hero in the Commedia dell’Arte, rather each character had a storyline with a beginning, middle and end to their plight, and all these stories were woven together to end, usually with a marriage, in the final scene. As well as socially, the characters were also divided by whether or not they were masked. The masked characters are cyclical and end the story back in their rightful places; the unmasked are linear and go on a journey from one state to finish in another. Both sets of characters have lessons to learn on the way about life, love, justice and society – all topics that would concern their audience.

Commedia actors studied hard for their parts, and learned quantities of text. The unmasked lovers learned love poems and duets; the professionals were familiar with business ideas of the day, the latest interests of the academic societies, and could speak Latin, Greek and Hebrew like their equivalents in the audience. The braggart Captain had speeches of valour and ridiculous long Spanish names. The players of the servants had to practise tumbling and set piece gags, or ‘lazzi’. All this had to be retained and inserted into scenes when appropriate and at the drop of a hat.

Commedia all’Improviso was a literate and visual theatre, speaking the ideas of the Renaissance literary society and using the vulgar visuals of the illiterate lower classes, combining the two to speak to the whole audience. Sound commercial sense! It also meant that the players of the Commedia all’Improviso were truly skilled. Trained to a very high level in their chosen roles, they were more than just actors, they were artisans of the theatre: the Commedia dell’Arte. 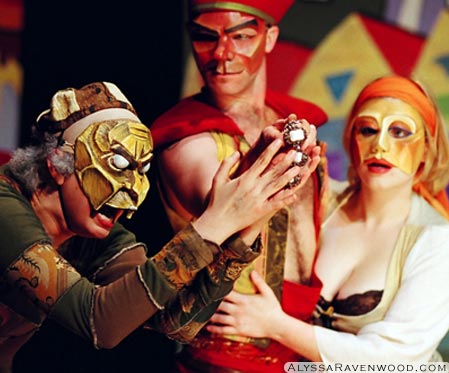 So why was Goldoni accused of killing Commedia dell’Arte?

Others, including Molière and Marivaux, had made text plays in the style of Commedia dell’Arte. But by the 1740s the Commedia was old. At its birth two hundred years before, it had sprung to life fully formed and travelled the courts and countryside of Europe, speaking secrets and introducing theatre to many of the countries it visited. It had a purpose. By Goldoni’s time it had forgotten that purpose and was wrapped not in the sharp ideas of the Renaissance but in the fluffy gauze of the Rococo of Watteau and the fairytales of Gozzi. It was not a murder, it was a mercy killing. Commedia was resurrected and brought back to life two centuries later by the Piccolo Teatro of Milan when, in 1947, Giorgio Strehler, Jacques Lecoq and mask-maker Amleto Sartori picked up Goldoni’s script and pieced together, through information and research, a new template for understanding the form, the characters and the rhythms of Commedia dell’Arte. It is a tradition that has influenced theatre, actors and playwrights and its strong imprint can be seen in Restoration comedy, melodrama, music hall, vaudeville, circus, pantomime and in the Zanni of Chaplin, the Marx Brothers, Laurel and Hardy, Mr Bean, and beyond. The work goes on.

Goldoni the playwright is innocent of the murder of Commedia dell’Arte. By writing down what he witnessed in his rich and theatrical Venetian landscape, he helped to preserve it and keep the flame alive. He tried to bring together two traditions of European theatre – the playwrights’ theatre, and Commedia – the actors’ theatre. Viva la Commedia!

If you would like to know more about One Man, Two Govenors, you can download the education pack that accompanies the show here.