I really enjoyed an article I read earlier in the week about a British theatre,  The Lyric Hammersmith, that is attempting to do something new, to shake things up a bit. Written by Matt Trueman, for The Guardian I thought I’d share it with you.

Sean Holmes on Secret Theatre: ‘There are no assumptions; it’s about honesty’

Frustrated by British theatre’s conservatism, the Lyric Hammersmith boss has decided to shake things up with a season of secret shows

“A lot of theatre is quite boring,” says Sean Holmes, fully aware this is not the sort of statement made by artistic directors of major…..theatres. These days, however – part moroseness, part mischief – Holmes is happy to lob a few home-truth hand grenades.

With funding squeezed, we’ve come to expect cultural cheerleading. Arts leaders fight their corner, championing their chosen discipline wherever possible. Theatre, we’re told, feeds television and film. It pays its way in VAT and cultural tourism and generally does this country proud. 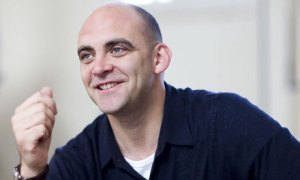 In June, the 44-year-old stood in front of an invited audience of peers and told them as much. “Maybe the existing structures of theatre in this country, whilst not corrupt, are corrupting,” he said. Maybe the theatre we trumpet as the best in the world, isn’t. Maybe it could be better, broader, bolder.” It was a barnstorming speech that pulled no punches. Even Holmes – burly, shaven-headed and one of British theatre’s great straight-talkers – admits he was afraid. “I was absolutely shitting myself; so nervous. I’m sure it pissed a lot of people off.”

Holmes runs through the basic argument again: “Most British theatre is well made, and maybe that’s what most audiences want. But there’s another audience – a young audience – that’s hungry for something else, for something that might just change them. Most theatre simply isn’t interested in doing that.”

Instead, he believes British theatre is rooted in commercial structures and standard practices. It runs on unquestioned assumptions – that rehearsals last six weeks, that the writer is central, that acting means pretending to be someone else – all of which add up to cultural hegemony and artistic compromise. Lest this sound like runaway hubris, Holmes includes himself: “Any criticism comes from self-criticism; me going, ‘I’m too cautious’.”

This frustration has prompted Holmes to challenge the norms with an atypical season born of unique circumstances. In April, a 20-strong ensemble – 10 actors and 10 writers, directors and designers – started working together under the label Secret Theatre. This month, they’ll open the first two shows of an eight-month, seven-show repertory season. The aim is to question the way theatre is made in this country and the type of theatre that results. “We believe that theatre matters,” runs the company’s manifesto. “We are hungry for change.”

There are two fronts to this: structural and artistic. The ensemble will be together for a year…..Six weeks of workshops preceded rehearsals proper; theoretically, the extra time spent together allows them to build a shared vocabulary and aesthetic understanding without reverting to habitual methods. Change the structures and you shift the possibilities.

“The starting point is that there are no assumptions,” Holmes explains. “With everything we do, we ask, ‘What the f**k are we going to do with this?'”

The philosophy extends beyond design and direction to play selection, casting decisions and marketing techniques. Audiences will book shows by number, not title. They might find themselves watching a classic text, a new play or something else entirely. Who knows what?

Casting isn’t merely gender- and colour-blind – the ensemble necessitates non-literalism – it is also willfully topsy-turvy at times. Scripts aren’t sacred. Scenes are played out of order. Lines get chopped and changed. Stage directions are obliterated. If a moment needs a dance routine, it gets one. If a pop song does the job better than dialogue, it’s tagged in. Every decision is up for grabs.

All this stems from last year’s (production of) Three Kingdoms. Simon Stephens’ play – and Sebastian Nübling’s distorted staging, in particular – has clearly had quite an impact on Holmes. Though it opened to underwhelmed reviews and half-full houses, the production found vocal champions online and, by the end of its three-week run, was selling out entirely, mostly to eager young audiences. Holmes talks about a generation waiting for their 1956-Look-Back-In-Anger moment: “On a good day, Three Kingdoms was the John the Baptist to that.” 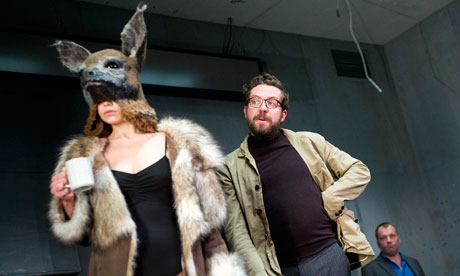 Stephens, now Secret Theatre’s resident dramaturg, recalls “a response I’d never seen in my career”. He believes Three Kingdoms left three major marks: “Audiences remember the inventiveness of actors, their unapologetic presence in the room and their sheer physicality.” The performers didn’t just act out a scene, they warped it into something else. They didn’t kowtow to the script’s demands. They made it anew, in their own personal and inimitable style.

Secret Theatre has maintained not only the same “spirit of attack” but also the same honesty, says Stephens. “No pretending” has become the company’s mantra. The cast play themselves, even in some of the most iconic roles in drama.

“Our aesthetic is, ‘Look at us. We’re just humans on a stage’,” says Holmes. “It’s about honesty. We can’t get a fight director. We can’t do accents.”

Everything needs an alternative approach, one that the actors can own entirely. The refusal to pretend means they have to rely on analogy and metaphor, so that frying an egg might stand in for a scientific experiment. It adds an extra layer to the play, representing and commentating at the same time. “It’s about going against the text – not to be perverse, but to reveal the writing.”

Even as early as mid-July, rehearsal performances feel dangerous. Classic scenes are unrecognisable and fiercely charged. The company, most of whom are significantly younger than Holmes and Stephens, clearly relish the agency and provocation it’s provided. Actor Leo Bill, 33, feels like it allows him to consider himself an artist – something frowned upon in the wider industry that deems acting a craft. “You couldn’t stand up at drama school and say, ‘I’m an artist.’ You’d be told to sit down and shut up.

I’ve met older actors who are adamant they’re not artists. They just do what the director tells them as best they can.”

Not so here. Actors pull scenes in radical directions without warning their colleagues. They arrive onstage with props they’ve just picked up. They’re happy to actually fight each other; to spit and snog and sing. There’s no sign of the “middle-class politeness” that so frustrates Bill in other rehearsal rooms. At one point, a group discussion of a short confessional monologue dissects the paradox of sin and forgiveness – a cycle that makes both terms redundant – within a minute. “Usually there isn’t time for talking,” says Bill, “because you’ve got four weeks to put a show together.”

But Secret Theatre is underpinned by a luxury: freedom from normal commercial pressures. “Whatever we did this year, we would struggle financially,” Holmes admits. “There was always going to be some kind of deficit.”

Reduced design costs will compensate for increased wages, but the theatre will have to dip into reserves nonetheless. “It’s an opportunity to examine every aspect of how we run a theatre building,” says Holmes.

In that, Stephens draws comparisons with the Royal Court’s Open Court. “Three things over one summer could really force people to interrogate the conditions in which work is made.” Yet, where those projects have quietly downplayed their radicalism, Secret Theatre has defined itself with a combative, critical rhetoric that could easily trigger a backlash. “We’re just putting some plays on,” Stephens adds. “That’s all we’re doing. We’re not bringing down the government or starting a political party.”

But Holmes and his young company are already looking to the future. “Far worse than it failing is the possibility that it succeeds,” says Holmes. “Then we have to make it sustainable.”

When I read something like this I always have to question (albeit in this case, in a very small way) whether the intention will be fulfilled. The response on Twitter to the opening Secret Theatre #1 put my mind at rest:

@LyricHammer what you’re doing with Secret Theatre is possibly the single most important experiment in british theatre in decades. go on!

Just seen Show 1 @LyricHammer. OMG! Really OMG! Came out feeling shellshocked. Battered. GO. You need to see this for yourself.

The #SecretTheatre ensemble are brilliant. 2nd time this week. 1st two shows are pure theatre and inventive to the nth degree.@LyricHammer

#showone@LyricHammer#secrettheatre is a cluster bomb into the violent subconscious of England. And quite, quite beautiful for it. I think

@StephensSimon@LyricHammer Tremendous quality of dislocation and presence simultaneously in the performers.

Having made this post, I then noticed that the opening week of Secret Theatre had created a bit of a (Twitter) storm. Two Secret Theatre shows opened, a little confusingly, Show 2, followed by Show 1. One theatre critic, Mark Shenton, went to see Show 2 and then tweeted the real title, A Streetcar Named Desire. And this is where it all got a bit bizarre. Some people were outraged that Shenton had undermined the idea underpinning Secret Theatre as this Storify trail shows. Jake Orr, a well-known theatre maker weighed in with an attack on him on his blog, Where Theatre is Thought, calling Shenton Scrooge for spoiling the fun. And so it went on, with Lyn Gardner having her (sensible and grounded) say in her blog post, Not so Secret Theatre. 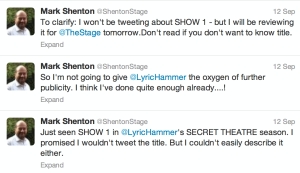 Then came an apology from Shenton in The Stage, To Tweet or not to Tweet a secret.

All in all, quite funny really, I think. Great free publicity for Secret Theatre and a theatre critic who will be a bit more careful with his tweets.