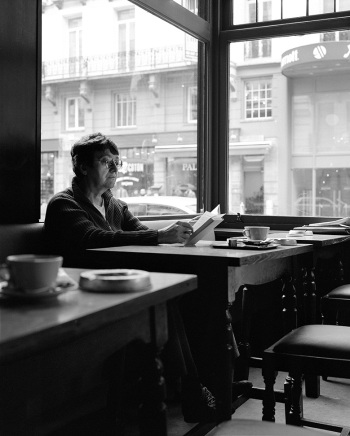 It seems to me that there is such a thing as a major and a minor dramaturgy, and although my preference is mainly for the minor, which means those things that can be grasped on a human scale, I would here like to talk about the major dramaturgy. Because it is necessary. Because I think that today it is awfully necessary. We could define the minor dramaturgy as that zone, that structural circle, which lies in and around a production. But a production comes alive through its interaction, through its audience, and through what is going on outside its own orbit. And around the production lies the theatre and around the theatre lies the city and around the city, as far as we can see, lies the whole world and even the sky and all its stars. The walls that link all these circles together are made of skin, they have pores, they breathe.

These words were spoken by Marianne Van Kerkhoven, a Belgian dramaturge who died last week. Kerkhoven was a leading light in political and ‘new wave’ theatre throughout her career. It is perhaps not surprising that I hadn’t heard about her work until after her death, but it is clear that she was extremely influential and highly regarded. Again it got me pondering the role of the dramaturge in theatre making, particularly after my recent post, You Do What?. I came across a piece, written by Kerkhoven, and posted on Sarma, a site that, amongst other things, has a focus on dramaturgy. It is titled On dramaturgy – Looking without pencil in hand  and makes interesting reading.

“(…) distance is often linked with the most intense state of feeling, in which the coolness or impersonality with which something is treated measures the insatiable interest that thing has for us.” (Susan Sontag)

1. The request to talk or write about it leads time and again to the same awkwardness: the feeling of being asked to reveal someone else’s culinary secrets or recipes.

2. In artistic practice there are no fixed laws of behaviour, or task that can wholly defined in advance, not even for the dramaturge. Every production forms its own method of work. It is precisely through the quality of the method used that the work of important artists gains its clarity, by their intuitively knowing – at every stage in the process – what the next step is. One of the abilities a dramaturge must develop is the flexibility to handle the methods used by artists while at the same time shaping his/her own way of working.

3. Whatever additional tasks – sometimes very practical and certainly highly varied – the dramaturge takes on in the course of an artistic process, there always remain several constants present in his work; dramaturgy is always concerned with the conversion of feeling into knowledge, and vice versa. Dramaturgy is the twilight zone between art and science.

4. Dramaturgy is also the passion of looking. The active process of the eye; the dramaturge as first spectator. He should be that slightly bashful friend who cautiously, weighing his words, expresses what he has seen and what traces it has left; he is the ‘outsider’s eye’ that wants to look ‘purely’ but at the same time has enough knowledge of what goes on on the inside to be both moved by and involved in what happens there. dramaturgy feeds on diffidence.

5. Dramaturgy is also being able both to affirm and to repudiate at the right moment: knowing what, when and how to say something. Based on a realization of the vulnerability of the building blocks, but also conscious that the construction sometimes needs a good pounding.

6. It also invites the building up of a special type of personal relationship, in order to carry on conversations that are on the one hand highly specific – they are, after all, concerned with that progress of practical work – and on the other very serene and ‘wasteful’ in the ay a very personal contact is.

7. By means of his/her writing about a production, the dramaturge smooths the way towards its public airing. Whatever he/she writes must be ‘correct’; it must describe the work in an evident and organic way and lend a guiding hand on its way to its life in society, a life which often has a destructive effect on its meaning.

8. Dramaturgy is also sometimes – one is working after all with ‘groups’ – a psychological mediation. The basis for this lies not, however, in the technical approach of the professional ‘social worker’, but rather in the disinterested motives of ‘a friendship in the workplace’.

9. Dramaturgy is a limited profession. The dramaturge must be able to handle solitude; he/she has no fixed abode, he/she does not belong anywhere. The work he does dissolves into the production, becomes invisible. He/she always shares the frustrations and yet does not have to appear on the photo. The dramaturge is not (perhaps not quite or not yet) an artist. Anyone that cannot, or can no longer, handle this serving – and yet creative – aspect, is better off out of it.

10. Dramaturgy means, among other things: filling in in a creative process, with whatever material necessary; the assimilation and ‘guarding’ of a project’s ‘first ideas’ in order, occasionally, to restore them to memory; to suggest without forcing to a decision; being a touchstone, a sounding board; helping provide for inner needs. For this reason one of the essential axes on which the practice of dramaturgy turns is the accumulation of a reservoir of material – amassing knowledge in all fields: reading, listening to music, viewing exhibitions, watching performances, travelling, encountering people and ideas, living and experiencing and reflecting on all this. Being continuously occupied with the building up of a stock which may be drawn from at any time. Remembering at the right time what you have in your stockroom.

11. There is no essential difference between theatre and dance dramaturgy, although the nature and history of the material used differs. Its main concerns are: the mastering of structures; the achievement of a global view; the gaining of insight into how to deal with the material, whatever its origin may be – visual, musical, textual, filmic, philosophical etc.

12. At present, purely literary or linear dramaturgy is seldom to be found, in either dance or theatre. Dramaturgy today is often a case of solving puzzles, learning to deal with complexity. This management of complexity demands an investment from all the senses, and, more especially, a firm trust in the path of intuition.

Still a definition of the role remains hard to grasp.  This led me back to dramaturg’s network, which I have mentioned here before, and found the following; an attempt to tie a definition down written by John Keefe, who is a lecturer in theatre, a director and a dramaturge:

Dramaturg : Dramaturgy – Towards a Definition

Provocations for a discussion

To begin: an indication of the multiplicity of responses to the two terms ranging from the abstract to the technical….

Dramaturgy: from ‘text’ – a weaving together; from ‘drama-ergon’ – the work of the actions; thus, that which concerns the weave of the performance, (see Eugenio Barba & Nicola Savarese, A Dictionary of Theatre Anthropology, 1991).

Dramaturgy is the dialogic relationship between subject matter and its theatrical framing; content and form, (see Norman Frisch, Theatrerschrift 5-6, 1994).

Dramaturgy is the concern with composition, structure, staging and audience from literary analysis and historiography, (see Gotthold Lessing, Hamburg Dramaturgy, 1767-69).

Dramaturgy: not only the subject but also the object is constantly moving; dramaturgy is movement itself, a process, (see Marianne van Kerkhoven, Performance Research 14:3, 2009).

Dramaturgy: the wooden walls of small drawers with brass handles in the hardware stores of my childhood; the dramaturg opens each drawer to reveal new objects of indeterminate but indispensable use, (see John Keefe, State of Mime, Summer 1995).

Dramaturg: a literary reader-editor concerned with playscripts, (see A Dictionary of Theatre, Penguin).

Dramaturg: one who assists the traffic between stage and auditorium through the conceptual preparation of a production in its political, historical, aesthetic and formal aspects, (see Bertolt Brecht, The Messingkauf Dialogues, 1939-55; The Journals, 1934-55).

Dramaturg(e): one who is responsible for research and the development of plays, (see Wikipedia).

Dramaturg(e): a researcher and intellectual ‘go-fer’ who acts as the artistic conscience for the theatre, (see Bert Cardullo, What is dramaturgy, 1995).

So trying to bring these and other suggestions and definitions together:

Dramaturgy – as theatre science, a rigorous, analytical and sensitive approach to theatre practice and discourse (the play-text and stage-text), bridging the tension and ‘agon’ between the conceptual and the practical as the two (Janus) faces of theatre.

Dramaturg – as theatre scientist, one who looks and listens with knowledge, insight, rigor, sensitivity and open-mindedness helping to create the play-text with writer and director and/or the stage text with the production ensemble for presenting to a theatre ensemble (performance and audience). The function may be performed to a lesser or greater degree by members of the production ensemble, by other theatre or curatorial professionals, by education professionals whereby their contributory role is acknowledged as such.
The spectator is, of course, his/her own dramaturg by nature of their presence and engagement.

I’m not sure whether these are definitive definitions, but they are the latest and things seem to be merging toward a wide-ranging, encompassing understanding of the nature of the role….probably. 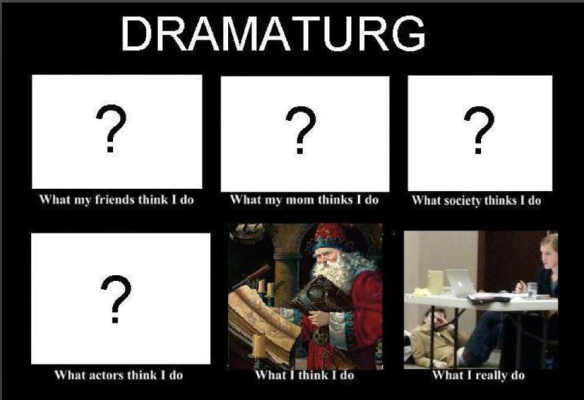 Perhaps it would help if we had a definitive way of spelling it –  ‘e’ or no ‘e’, that is the question.