I am going to out myself today! I am geek – a science fiction geek. I have always loved it and when I saw this Tweet recently my interest was immediately grabbed:

I thought that I had never seen any science fiction on stage but when I looked at the ‘call for papers’ for the Stage The Future conference I realised I had. Samuel Beckett’s Endgame is of course set in a post-apocalyptic future,  Caryl Churchill’s A Number is about human cloning in a near future world and Howard Brenton’s Greenland is set in a future utopia 700 years from now. Hollywood has always had the grip on science fiction, simply because of the special effects and CGI that it could offer.  But of course the kind of technology that is now available in theatre is starting to change all that. 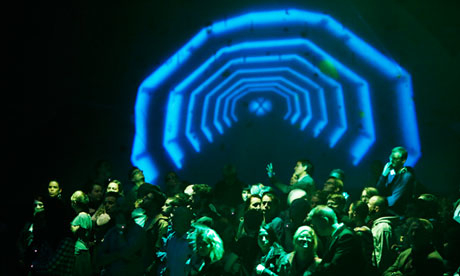 A new piece of theatre called Leaving Planet Earth is just about to open at the Edinburgh Festival which sounds like it is really breaking new ground. It has been created by a company called Grid Iron and, to quote the publicity material it fuses live interactive performance with innovative digital and new media technologies. It is an immersive, site-responsive, promenade piece. An article written by Charlotte Higgins in the Guardian talks about how the show was created:

Sci-fi theatre sends audience out of this world

Leaving Planet Earth, one of Edinburgh international festival’s most ambitious productions, to take off in disused quarry

But now a new production – one of the most ambitious of the Edinburgh international festival, which opens this weekend – is putting sci-fi into the theatre. Or rather, instead of into a traditional theatre, into the distinctly intergalactic setting of the Edinburgh international climbing arena. The biggest of its kind in Europe, it is based in a vast disused quarry on the fringes of the city.

The show, Leaving Planet Earth, is the creation of a pair of Glasgow-based artists, Catrin Evans and Lewis Hetherington. Evans, a sci-fi fan, had been impressed by the way TV series such as Battlestar Galactica had used the genre to provide acute political commentary (it was one of the few mainstream American TV shows to offer a critique on the occupation of Iraq, for example).

Working with the Scottish theatre company Grid Iron, which specialises in site-specific, immersive theatre, Evans and Hetherington came up with a storyline in which the audience has become the last group of people to leave Earth for a new planetary home and are being taken on an “induction” into the new planet. 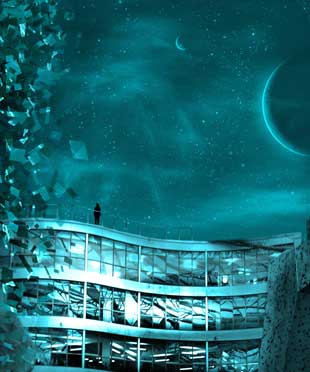 The story begins even before audiences arrive – they will have received an email message that asks them to watch a motivational video about their new home and invites them to upload an image of an object for a museum devoted to Earth.

When they arrive they will be led through the arena buildings, where high-tech glassy surfaces come up against rugged rock faces, and views give out on to the huge sheer faces of the old quarry.

The two artists began to think about a situation in which humans were “involved in a migration into space”. What if a sci-fi story could be used as the carrier for thinking about some big questions about, according to Hetherington, “our relationship to the planet and human responsibility” and “the nature of progress, betterment, advancement and growth”?

But at bottom, they say, it is a human story: about the characters’ own attachment to the past, memories and hopes for the future.

The promotional video mentioned in the article is here:

There is even a website that forms part of the piece, here. I look forward to reading the reviews when they come out.

Out of curiosity, I did a little further research and came across the Science Fiction Theatre Company who are based in Boston. Perhaps Sci-Fi theatre really will be the next big thing. For those of you reading this who are IB Theatre Arts students, maybe the IBO will have to add a new theatre tradition to their list very soon.

1 thought on “Out Of This World”