So said Bruce Lee, apparently. The reason for me quoting the Hong Kong legend is that it is bamboo theatre time in his home city. Throughout the year in town centres, village squares, on football pitches and car parks across Hong Kong these beautiful temporary bamboo structures spring up and disappear. 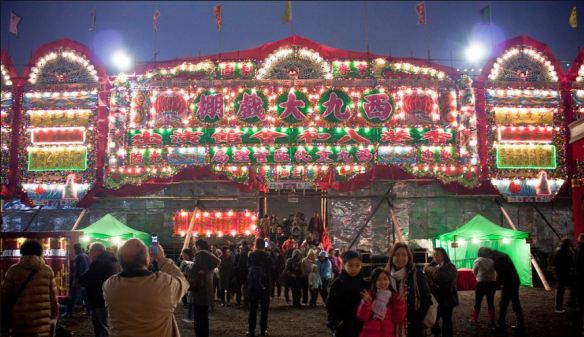 They house Cantonese opera performances at festival celebrations throughout the year. They are works of art in themselves. For those of you have not visited Hong Kong bamboo is the king of construction. We might have a harbour skyline from the future, but the scaffolding that allows the futuristic skyscrapers to be built is bamboo, not steel, even in 2013. There is good reason for this, it’s not just tradition. Hong Kong suffers from typhoons (or hurricanes if you are from the Americas) so if a big one comes in, a flying tower of bamboo does far less damage than one of steel.

So, our temporary theatres are built entirely by hand, using bamboo, usually by fewer than ten workers, and they are held together with nothing but plastic ties. The biggest theatres can hold up to 6,000 people. This also means they can be built in the most unlikely places. The one above is the car park of a seaside village, Shek O. The ones below are on a rocky sea outcrop on the Po Toi Island.

Sadly though, in the last couple of years, I’ve noticed that these beautiful buildings are being replaced by steel-frame stages, rather than bamboo, because, apparently, they are easier to assemble and require less-skilled workers. Such a shame! However, and even more sadly, the decline of the bamboo theatres matches the decline in the popularity Cantonese Opera itself. My students tell me that it is viewed as something for our grandparents.

There is a really interesting article here from the Urbanphoto blog with an interview with bamboo master Ying Che, who married into a family of bamboo masters going back three generations. I’ve Tweeted it too.

There is a great irony in all of this though. In an attempt by the Hong Kong government to compete with Singapore as THE asian arts hub, we have under development a project known as the The West Kowloon Cultural District (WKCD). Located on waterfront reclaimed land, the district will feature a new museum of visual culture, numerous theatres, concert halls and other performance venues. It has been dogged by a series of problems, but is now finally making progress. I celebrate it – it’s a wonderful and expansive project. One of the first buildings to have its designs approved is the Xiqu Centre. According to the WKCD’s website;

The Xiqu Centre will symbolise the importance of Xiqu [Chinese/Cantonese Opera] and its rich heritage for our city. It was conceived to support and promote Xiqu as a contemporary art form making it accessible to new audiences, and keeping this remarkable piece of our heritage alive for future generations.

So how did we celebrate the finalizing of the design for Xiqu Centre? 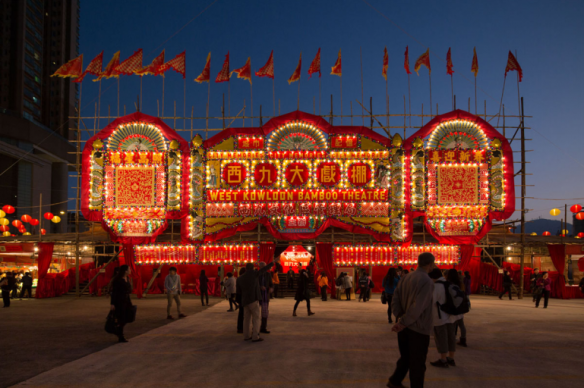 In fact Ying Che and her family built it. If you click on the image below, you can see some images:

You can get a better flavour of the theatre in this video:

And why am writing about all this? Well I think Hong Kong seems to have managed to marry modernity and tradition in a way that other Chinese cities haven’t. I hope that by promoting Cantonese Opera and its heritage through the yet to be built Xiqu Centre will keep our bamboo theatres alive too. I’d hate to see them disappear and be replaced by their steel contemporaries. I hope the WKCD people see the beauty in building a bamboo theatre every now and again on their spanking new site. I think I might start a campaign……anyone join me?

1 thought on “Notice that the stiffest tree is most easily cracked, while the bamboo survives by bending with the wind”