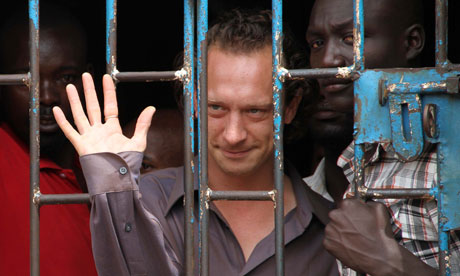 This is an image taken on 16th September of British theatre producer, David Cecil. He was appearing in court in Kampala, Uganda, after having been arrested.  What had Cecil done? Well, he dared to stage a play about homosexuality in a country that is currently debating a law that could possibly make being openly gay, punishable by death.  Currently you can be imprisoned for life in Uganda for being gay.  Cecil was, in fact, released on bail, pending another court appearance in mid-October that could see him put behind bars for 2 years.

His actual crime was to stage the play, The River and The Mountain, by playwright Beau Hopkins, without gaining authorisation from the Ugandan’s Media Council. The National Theatre of Uganda refused to stage play because some government officials objected to it. The play tells the story of a corporate businessman coming to terms with his sexual identity in a climate of oppressive homophobia.  The protagonist, Samson, is a good man and a gay one. When his mother learns of his homosexuality, she tries to cure it by hiring a pastor, a private dancer and finally a witch doctor. The play ends with his murder at the hands of his co-workers.

If click the image above, which is taken from the play, you can read an interview with Okuyo Joel Atiku Prynce who played the lead role of Samson in The River and the Mountain.

Theatre has played a significant role in the last 50 years in bringing about the legalisation of homosexuality right across the world. Only yesterday in The Observer, British theatre critic Michael Billington wrote a lengthy piece about Tennessee Williams’ Cat on a Hot Tin Roof entitled Tennessee Williams’s southern discomfort. For those of you who don’t know the play, it deals in part with the suppressed homosexuality of one of the lead characters, Brick.

I have nothing but the utmost respect for people like David Cecil and the cast of The River and The Mountain who dare to challenge what they belive to be morally unacceptable. Only last year a gay rights activist in Uganda, David Kato, was brutally murdered after a tabloid news paper printed details about his private life.

Theatre has a long history of inciting fear in governments and other powerful people, that results in banning – look back as far as Molière and even farther. Molière, a French actor and playwright, wrote Tartuffe in 1664 and that was banned after being performed at Versailles for attacking and exposing the hypocrisy and deceit of the upper classes. People were afraid it would affect change, and wham, it was gone. And as you look through the history of theatre, you begin to realize that a playwright wasn’t tackling enough daring subject matter if they hadn’t been banned in some theatre somewhere. Theatre-goers have historically been a riotous bunch, so you can see where the fear would come from.

A modern audience member really recognizes the power of work on the stage to change the course of politics and daily life off the stage. Playwrights like Bertolt Brecht based their entire body of work off that power. Plays like The Laramie Project (about the murder of Matthew Shephard, a show that brought the discussion of hate crimes and trials to a nation)  were written to directly engage with politics and to change the mindset of the culture around them, to explore territory that had not yet been explored.

The story of David Cecil and The River and The Mountain is not over yet.